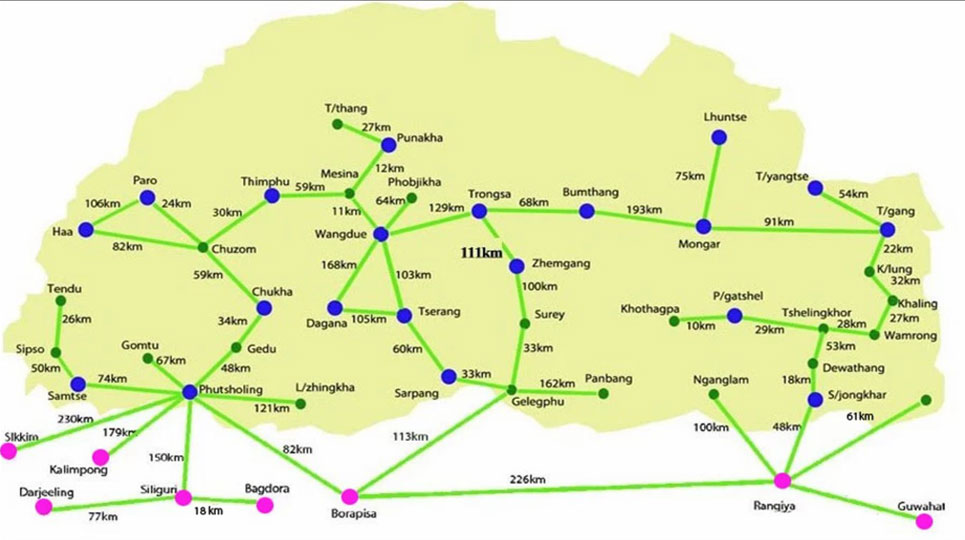 Thimphu is the capital of the Country with most of the population inhabiting the city. It is home to almost 100,000 of the country’s population. It may be the only capital city in the world without traffic lights and an airport of its own. It is an hour drive from the Paro International Airport. It is also the trade hub of the country.

Bhutan is a small mountainous country approximately 300km long and 150km wide with an area of 38,394 square kilometers.

Bhutan’s landscape ranges from lush subtropical plains in the south to the sub-alpine Himalayan Mountains in the north, where there are peaks in excess of 7,000 meters (23,000 ft). The country is enclosed by rugged mountains and vast valleys.

Bhutan local time is 6 hours ahead of GMT.

The climatic weather of Bhutan is varied from region to region depending on the difference in the altitude and the air pressure from North Indian Monsoons.

The southern part of Bhutan has hot and humid subtropical climate during the summers and in winter the climate remains fairly pleasant with warm air and no humid. The temperatures usually fall between 15-30 degrees Celsius. Whereas in the central part of Bhutan because of the temperate and deciduous forests, the climate changes from warm summers to cold winters with occasional snowfall.  The northern part of Bhutan is almost covered in snow all year long with favorable summers with warm sun and harsh winters.

Bhutan experiences 4 different Seasons in a year; spring, summer, autumn, and winter.  The months of March, April and May are considered spring and during this period, the entire country is in full riot of the beautiful spring blossoms. The months of June, July and August are considered as summer and the monsoon season also falls during the summer. The months September, October, and November is considered as autumn and also the fall season. That is when the entire landscape turns golden and trees lose leaves.  And lastly the months of December, January and February are considered winter.  The central and the northern part of Bhutan experience snowfall.

The wide range of altitude exposes Bhutan to a different climatic condition in a different region and this has gifted Bhutan with a rich biodiversity. Bhutan has a relatively undisturbed natural environment. The combination of delayed developmental activities and unwavering environmental conservation policies has further reinforced its conservation effort. The constitution of Bhutan mandates a minimum of 60% forest cover at all times. Today approximately 72% of the total land area is under forest cover. Majority of these areas have been identified and protected as national parks and sanctuaries.

Bhutan has over 800 million trees and over 71% of the total land area is under forest coverage and the constitution mandates that at least 60% of the land be under forest coverage for all times to come.  The protected areas of Bhutan consist of national parks, nature preserves, and wildlife sanctuaries. The protected areas cover more than 42% of the kingdom consisting of five national parks, four wildlife sanctuaries and one nature reserve and an additional of 3307 sq km is designated as a set of connections of biological corridors linking all nine protected areas, hence placing 52% of the country’s area under some form of protection.

As of 2016, Bhutan’s GDP is at 2.237 billion USD. Bhutan’s largest export is hydroelectricity. Other contributors to the GDP of the country are agriculture, industry, mining, and tourism.

The currency of Bhutan is Ngultrum which is pegged at par with the Indian rupee. The symbol of the currency is Nu. And the code is BTN.

Bhutan opened its doors for tourism only a few decades ago after remaining in isolation for many years fearing exploitation of cultural and environmental values. Bhutan still seeks to preserve its unique culture and conserve it natural environment by mandating a tourism policy of high value and low impact so it imposes a daily fee of US$250 on tourists that covers tours, accommodation, transportation, and food. The industry accounts for 1.8% of GDP.

Paro Airport is the only international airport in the country with two Airlines operating flights to and from few destinations like India, Nepal, Thailand, Bangladesh, and Singapore. The national Carrier Druk Air and the privately owned by Tashi Group of Companies, Bhutan Airline are the only two airlines in Bhutan.

Since Bhutan is a mountainous country, the districts are only connected by roads. Bhutan is also connected to India by road through the Phuntsholing town which is linked to Jaigoan, West Bengal of India.

Gross National Happiness was first coined in the 1970s by the Fourth King of Bhutan, His Majesty Jigme Singye Wangchuck. The internationally acclaimed concept in its essence is measuring the collective happiness of its people to gauge the national progress rather than using the conventional measure of GDP. Gross National Happiness constitutes a set of national values that guide all its developmental activities. These values include socioeconomic development, cultural preservation, good governance and environmental conservation.

Mahayana Buddhism is the state religion. The ubiquity of ancient Buddhist monastery, temples, stupas and state-sponsored monastic institutions across the country suggests the enormity of its influence Buddhism has played in the Bhutanese society. Aside from providing spiritual guidance, Buddhism has also inspired social behaviors that form the basis of modern Bhutanese culture. Religion and culture hence remain inseparable and is greatly revered by the Bhutanese.

Tsechus are religious festival celebrated across the country. The festival honors Guru Rinpoche, a Buddhist saint who is believed to have introduced Buddhism to Bhutan. The monks perform a series of meticulously choreographed religion inspired dances. The sacred masked dances are believed to invoke deities to bless the congregation. The monks perform the dance wearing spectacular colorful silk costumes and an exquisitely crafted mask depicting deities from the Buddhist mythology. The visual aesthetics of the festival fascinates most tourists. Tsechus are organized in the courtyard within or around the great Dzongs (fortress).

The spiritual social event lasts several days. Locals celebrate the festival dressing ostentatiously and cooking sumptuous food for the event. The unfurling of a huge applique scroll painting (thangka) representing the Guru Rinpoche and his eight manifestations before the break of dawn marks the final day of most Tsechu. At sunrise, the thangka is withdrawn again and will not be displayed for another year.

Two of the most popular Tshechus are the Paro Tshechu and the Thimphu Tshechu.

The spread of Buddhism across the country was accompanied by the proliferation of the construction of monasteries, temples, stupas and also the documentation of the doctrine. The architectural design and its aesthetics of these constructions were mostly dictated by Buddhist saints supposedly inspired from Buddhism. The key skill sets employed during the ancient era were recognized and institutionalized. The traditional arts and crafts artisans today play a critical role in preserving this heritage and ensuring the continuity and promotion of the skill sets.

The structural aesthetics and the interior design of a fortress embody the essence of the traditional arts and crafts of Bhutan. The interior of a fortress (Dzongs) is adorned with intricate murals. The wooden pillars providing structural stability are handcrafted into an exquisite woodwork. The inner sanctum is ornamented with meticulously sculpted clay statues gilded with gold and these statues are offered scarf made of premium fabric sewed by the best tailors in the country and the collection of sacred text penned with gold is a display of the amazing art of calligraphy passed down from generations. The exterior structure that houses all these artworks is equally focused. Traditional Bhutanese woodwork, masonry, metalwork, and paintings are highlighted in all Bhutanese architectures.